With the start of our new Rotaract year, the time came to pick a new charity to focus our fundraising efforts on. There were some strong suggestions but after a vote, SpecialEffect came out on top.

They are a local charity, based in Charlbury in Oxfordshire, who specialise in making video games accessible for people with disabilities. By using a range of technology, including modified joypads and eye control, the charity is able to put fun and inclusion back into the lives of those with disabilities and make sure that they can play to the best of their ability.

And it’s not just fun and enjoyment that gamers can get from their games. The charity has seen many physical improvements from those who they’ve helped, along with huge boosts in self-esteem and independence.

Alongside adapting video games and controllers, the charity also provides special EyeGaze software to people who have been injured or in accidents, leaving them either temporarily or permanently unable to communicate. The clever software tracks a person’s eyes and allows them to communicate through a screen with a voice, meaning that they can communicate with doctors, nurses and family members and is invaluable in reducing isolation.

The work that SpecialEffect do is transformational and unique. They are determined that everyone, whatever their physical disability, should be able to share the fun, laughter and inclusion that video games can bring. This is something that is close to many of our members’ hearts so we will be doing loads of fun events throughout the year to make sure that we fundraise as much as possible for this great charity!

If you’d like to learn more about SpecialEffect, the work that they do, the people who they’ve helped and their ‘One Special Day’ fundraising campaign, check out their website: www.specialeffect.org.uk/

Our Scavenger Hunt took place in sunny Oxford city centre on Saturday 13th May and we had a record number of teams enter – 11 teams with some people coming from as far as Woking to take part!

Everyone got into the spirit of it with inventive team names and determination to complete as many clues as possible. Team ‘Will Power’ were the winners in the end, and even ran to the finish point at G&D’s ice cream cafe on St Aldate’s to secure the prize of luxury hamper. 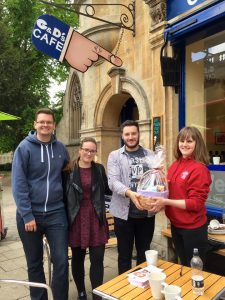 Well done to everyone who took part. We are delighted to say we raised £100 from the day which will go to our chosen charity, Helen & Douglas House, to help with all the amazing work they do.

Stay tuned for details of our next event!